This summer has been a weird one for me, while I’ve been able to fit in a number of daytrips here and there, I’ve yet to have an actual “vacation” this summer.  That’s why it was especially nice to head to Gravelbourg recently, and experience a “Little

Touch of Europe on the Prairies” as the town brands itself.  No where was this touch of Europe more prevalent than at the Cafe Paris, (pronounced as it should be as Kaf-ay Pair-ee), in this predominantly French speaking town. 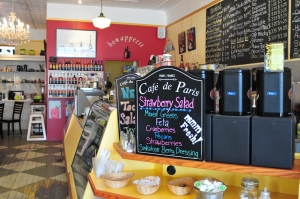 What’s particularly interesting is that while all of the branding elements of this quaint little cafe are French, it’s owner is actually Dutch.

Toos Giesen-Stefiuk moved to Gravelbourg from her native Holland and after her first husband passed, she knew that the motel that they had run together would be too much work for just one person.  Selling the motel, she looked for something “fun” to do that would keep her busy, and 7 years ago, began the cafe hoping to bring a little of the Europe she loved, to her new home.  Not an easy task – but one she persevered at and from the looks of it she’s succeeded, for when you walk into Cafe Paris you definitely feel like you’ve stepped into a European cafe.

Popular amongst locals and tourists alike, it’s got all the elements – bistro tables in the front, bright colours, the local “French-styled” artwork on the walls, and a gorgeous back patio. I think anyone who’s been to Europe will agree, she’s definitely represented it here well.  (The bike seems like a prop, but it’s actually one of the employees mode of transportation!).  Still decor is only half of the battle when running a successful cafe, and if you don’t have the right food and beverages to serve, it still won’t have that “je ne sais quoi” element of perfection.  Thankfully, they’ve got their menu down pat too! 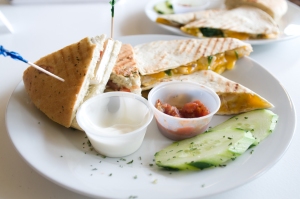 Our French Panini and Italian Quesadilla were delicious!

With tasty treats like their morning breakfasts which include Croissants, and Belgian waffles, as well as a variety of omelettes, and lunch-time fare that includes European inspired panini’s it’s light fare that sits well.  We ordered a French panini made with:  Tomatoes, Basil, Brie Cheese and Balsamic Vinegar,  and an Italian Quesadilla featuring, Tomatoes, Spinach, Italian spiced Chicken and Feta.  Both of which were served with fresh cucumber slices.

Of course we needed to wash it down with something – and my standard skinny, sugar vanilla latte (which not everyone makes to my liking) worked wonders for me! But they’ve also got a wide assortment of beverages perfect for any thirst.

If you’ve already seen the post on Our Lady of Assumption Co-Cathedral, you know that there’s something special going on here in Gravelbourg already, and after a morning or an afternoon of exploring the exquisite works of art there, Cafe Paris is the perfect place to wind down and fuel up to explore some of the other wonders Gravelboug has to offer.

From Moose Jaw: Total 117 km  —  Head South out of Moose Jaw on Highway 4 for 77 km and turn West (right) on Highway 43 following signage for Gravelbourg.  Or you can check out the map.

Gotta Go?:  Cafe Paris – is as elegant as it sounds – even when it comes to the Toilette!  Pretty and clean, the ladies bathroom even has a change table if you’ve got a little one that’s already gone!

2 thoughts on “Little Paris on the Prairies”