As people travel Saskatchewan roads this summer and next, during what some people are calling the “Summers of the Centennial” – there are experiences and opportunities to be had, that you won’t find anywhere else.

In this our VERY FIRST guest blog – Shanon Armstrong and Ron Kesslar take us down the road to experience Mazenod, Saskatchewan’s (pop 7) Annual Homecoming – and let us know about a whole lot of Prairie fun that was to be had! (They seem to have a great sense of humour in Mazenod – just look at what they threw out for “candy”).  After reading this post – our advice to travellers is this: if you come across a Homecoming Celebration somewhere along your Saskatchewan travels, don’t be afraid to stop in – as you’ll soon read, you’ll be more than welcome!

Feel free to comment – or send us your own SW Saskatchewan Travel story!

Although Mazenod wouldn’t necessarily be considered a “Go Here Destination” for much of the year, you will be welcomed and entertained at least once a year when the former town’s people gather, share stories and bring back life to this old town.

It is July 20, 2012 and the homecoming celebration at Mazenod, SK is our destination.  This homecoming has become an annual event for many of the former residents since 2005, when Saskatchewan celebrated 100 years as a province.  This year also marks a ‘big one’.  It is the 100th anniversary of the RM of Sutton #103.

Highway 43 to Mazenod has certainly seen better days. The ‘Rough Road’, ‘Loose Stones’ and ‘Slow Down’ signs are plentiful.  It is not an easy drive especially when pulling an RV.

There is not much left of the old farmsteads that once surrounded the town.  Ron points to a clump of trees here and some fallen down buildings across the road and remembers the families who used to reside there.  The only thing marking the old Kesslar home are three shiny new grain bins. Nothing remains of the once busy two household farm where the Kesslar family first homesteaded when they came to Canada.

We approach town from the west entrance and are greeted by the one remaining town business.  The old Co-op Service station still pumps gas and sells a few confections to the remaining town residents.  That would be a grand total of seven people.  This Co-op was managed by Ron’s dad, John Kesslar for 20 years until his death in 1957.  We spoke to a current Co-op employee.  He is a young fellow who bought the former United Church manse for $400. and is now happy to call Mazenod his home.

He is a young fellow who bought the former United Church manse for $400. and is now happy to call Mazenod his home.

We have been told that we can park our RV anywhere in town and we choose a spot near the town hall where the festivities will take place.  We are behind the home that Ron grew up in, now abandoned and overgrown.  This area behind the home was once the family garden until the town decided to move the outdoor skating rink here.

Back of old Kesslar House

Today, there is no evidence of either.  A couple of old sheds and a small broken greenhouse are all that are standing in the freshly mowed field.  I am once again amazed by how much work has been done by a handful of people to spruce up the town and get ready to host a homecoming plus a roast beef dinner for 400+ people. 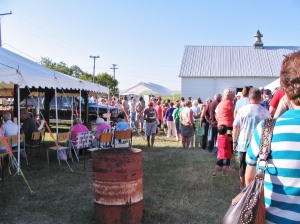 Many thanks to this hard working, dedicated crew.

We visit the graveyard behind the big old Catholic church.  It is now the garage and shop for the current resident of the once upon a time rectory.  Again, the graveyard has been mowed and is well kept by one of the local residents. Ron trims up the large spruce tree which was planted as a tiny green sprig at the head of his dad’s grave.

Back at the town hall there is lots of reminiscing and laughter.  We are treated to a wiener roast and an endless supply of homemade desserts.  Everybody still pitches in for these small town celebrations.  On Saturday we line up in front of the hall for the parade.  We quickly hide our beer cans when we learn the local RCMP is the lead car.  The old vehicles, old farm machinery, a couple of floats and the thrown candy are enjoyed by all.  My favourite

candy? A pair of false teeth. Too funny. 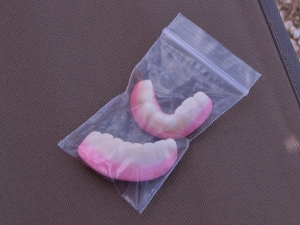 Other events include an afternoon beer garden and a tour of the Dennis Spanko farm.  Dennis has reconstructed miniature structures of the former Mazenod businesses.  Many of his old vehicles and machinery were in the parade.  There is musical entertainment plus speeches by the MLA and SARM reps. The roast beef dinner? Delicious and plentiful.

“Metro” (www.metroscomedy.com) provides some comic entertainment and after dark, fireworks light the sky.

The weekend concludes with a Sunday morning continental breakfast and a prayer service.

Once again we have enjoyed this ‘step back to the past’.  Although Mazenod wouldn’t necessarily be considered a “Go Here Destination” for much of the year, you will be welcomed and entertained at least once a year when the former town’s people gather, share stories and bring back life to this old town.

How to GoHere:  Midway and North between Moose Jaw and Swift Current, Mazenod is off the beaten track and can be accessed by taking Hwy 4 down from Swift Current, and then turning left at Hwy 43 to Vanguard – right on through Gravelbourg – straight to Mazenod.  It can also be accessed through Moose Jaw, on Hwy 2 as you head towards Assiniboia (turn right at Hwy 43).  Or you can just follow the map.

Good to Know:  Accomodations aren’t available and it’s BYORV – though there is still gas being pumped at the Co-op there.

3 thoughts on “Coming Home to Mazenod”