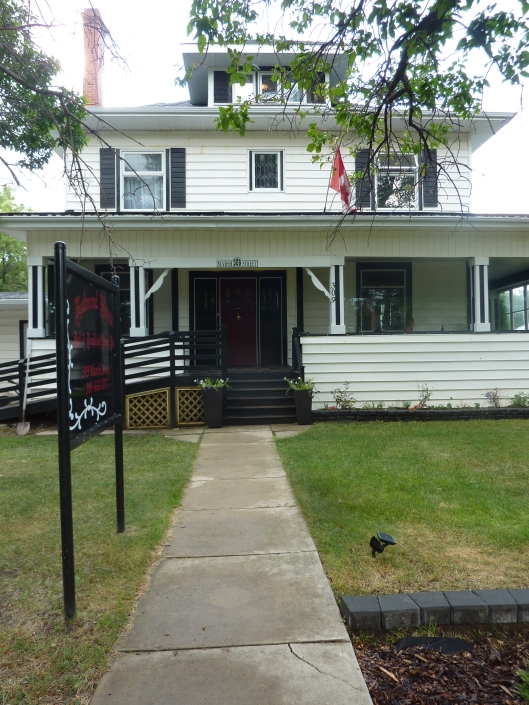 I’m a very lucky girl.  Unlike most couples that only have one anniversary, my husband and I have picked out three momentous occasions we categorize as “anniversaries.”  I’m doubly lucky that one of these anniversaries was spent at the Redmond House Bed and Breakfast in Maple Creek.

A nearly century-old former home that lies in an ordinary residential area of historic Maple Creek, the Redmond House was named after it’s first owner, William John Redmond, a member of the N.W.M.P. , and former owner of the Maple Creek News which he published and edited for 45 years. 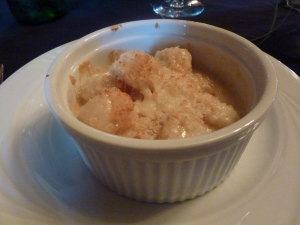 Known equally for it’s delectable evening and lunch dining experiences as for it’s B&B hospitality, we were amazed to see the wide variety of items on their menu – everything from Coquilles St. Jacques to the incredibly exotic Crocodile (yes, I said Crocodile) served with fried pineapple as two of the five appetizer choices,

to Tenderloin and Lobster, and Venison Strip-Loin as two of the eight entree choices available.

(They also have an impressive array of steaks available).  Let me tell you, as a person who steals from her husband’s plate on a regular basis, it all tasted amazing.  Even the crocodile which had an almost pork-like flavour with a calamari chewiness.  The broccoli even tasted yummy, though I can’t for the life of me tell you if it was a spice, or what it was that gave it that something extra.

Their wine selection appeared to be impressive but I didn’t get a chance to see it, as my husband (with a giggle) secretly ordered us a very nice bottle of wine, with a very unusual name (yes, you’re reading it right).

But it was the desserts that sent me into culinary spasms of joy!  Red Velvet cake for me, and

Chocolate/Peanut Butter Torte for my husband (which of course I also got to taste!).

There’s something about a great meal made even better when it’s served in elegant surroundings, and whether you choose to dine Al Fresco on the wrap-around front porch, or relax in the pretty dining room, with it’s big wide open windows, Redmond House definitely delivers both.

What would a post on a Bed and Breakfast be without commenting on the rooms themselves, which were visually as restful and elegant as the rest of the House.  Spacious and modern, with a closet I wish I had at home, I loved the little touches of the two robes that hung within, and the remote controlled light and fan that means you never have to leave the comfort of your bed to adjust them.

As for the bed’s themselves…well, let’s just say they were inviting and comfortable,  not great, not spectacular, but as good as you’ll find in most hotels. 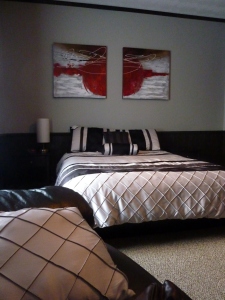 My only complaint, is not really a complaint at all, but rather an observation, that the age of the house insured that the walls and sound proofing was not what you would find in a more modern accommodation, but the patrons of the House were both quite and respectful, so there wasn’t really much noise to hear.

All in all, I’d definitely say if you’re looking for a great little getaway, or a way to celebrate that special occasion – you should definitely GoHere.

How to GoHere: The official address of Redmond House is 309 Marsh Street, and they have comprehensive directions and a map on their website here.

Gotta Go?:  Like most B&B’s the bathrooms are communal on each floor (x2).  It has a claw-footed tub that helps retain the houses’s period feel, while the cloth hand towels and dual flush toilet gives it an eco-friendly modern edge.