The newest Commercial Hotel owners, Marcelo Del Barrio, Jayson Catalasan, Ronald Del Barrio, and Noy Lim, hold a painting of the original hotel built in 1884/1885. The 1886 Territorial Directory describes the hotel as “The largest hotel in the Northwest Territory.”

The exterior of the Commercial Hotel in February, 2012. It is only a matter of time before the building will boast a new exterior say the owners. They are striving to restoring the heritage of the building while bringing the rooms up to modern standards.

Many times I have driven down Pacific Avenue in Maple Creek as I headed out to Cypress Hills. Not once did I pay more than a passing glance to the historic landmark, the Commercial Hotel, bearing the beauty and scars of a growing community and the battle wounds of the booms and busts that mark the relatively short history of Saskatchewan settlement. The story of the Commercial Hotel begins in 1884, and except for brief periods of closure, it has been in operation ever since.

Today, March 1, 2012, from the outside, the building is tired. A hand painted sign hangs above the lobby window, a string of Christmas lights flaps in the wind, strung across the balcony sagging under the weight of the remaining heavy winter snow. The paint is peeling off the side of the building and air conditioners grip the windowsills  of the third story rooms.

Stepping through the doors into the lobby – most remarkable for the intact nature of its 1911 original trim, banister and tiles – you are taken back in time and into the future all within a quick scan of the room.

To the left a shower door, still in a box and wrapped in plastic rests against the front window. The new box is one of many.

To the right, a wide staircase with large, bulky, wooden baseboards and railings beckons a visitor to go upstairs. Once upstairs the 2nd floor is stripped and shows the skeleton of the building revealing the red brick wall that separates the 1906 addition from the newer 1911 addition. Punctuating the hollowness of the building in its current state are the sounds of saws, hammering and material carts parts being pushed through the corridor.

The current owners of the hotel knew they were tackling a daunting task when they purchased the aging building heavily damaged by the flood that filled many Maple Creek basements and buildings in 2010. However, they say the project is a way for them to give back to the community and help people relive and experience the heritage of Southwest Saskatchewan.

In 2012 a group of Filipino immigrants, 7 of them in total, became the newest owners of the Commercial Hotel in Maple Creek. They have taken over the business and are slowly and steadily breathing life back into it. While focusing on maintaining the integrity of the buildings heritage and history they are completely redoing sections of the Century-plus building to bring it up to modern standards and to returned it to its former glory as a land mark destination in Maple Creek. 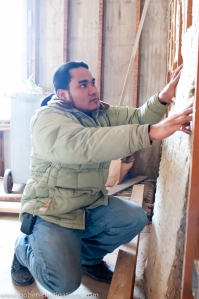 One of the owners, Jayson Catalasan, inserts installation between the rooms of the Commercial Hotel as they renovate the building to modern standards.

There will be 14 newly renovated rooms on the 2nd floor of the Commercial Hotel.

Out with the old, in with the new. The renovation project is no small feat for the group of 7 owners. Large portions of the building has been stripped down to the frame and many of the studs have been replaced. 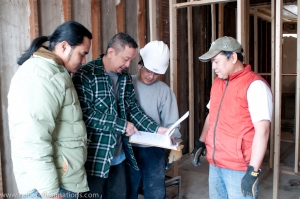 One of the owners is Chef Noy, known in the Southwest for his work at the Star Cafe, another heritage building in Maple Creek that has been restored and re-opened to offer an upscale dining option within the community. When asked what the new dining room at the hotel will feature, he won’t offer any more details other then “It is a surprise!” They would reveal that the bar will maintain a country/ranch-man feel and the rooms will be bright, but warm and feature a lot of wooden decor.

Given the hotel’s long history in the community and the proximity to Maple Creek’s original stockyards; the Commercial Hotel, has long been associated with the frontier period of the Cypress Hills, the birth of the town and Maple Creek’s ranching heritage. It is only suiting that the bar strive to keep up that connection. 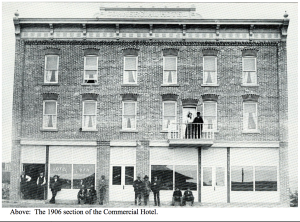 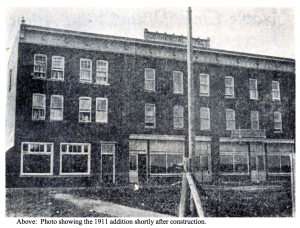 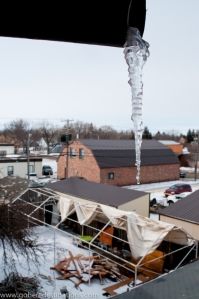 The patio as it is now – looking forward to patio season and checking out the new patio.

How to get there:

12 thoughts on “Up and Coming Destination – Reviving the Commercial Hotel”