The story of Hayley Wickenheiser is quaintly rural Canadian and one the community of Shaunavon is proud to have played a part in.

It was just like hockey mania. Those are the best memories that I have.

In a video (select the Hockey Background tab) made to introduce the nation to members of Team Canada’s women’s hockey team before the 2010 Vancouver Olympics, Hayley describes how she learned how to play hocked on an outdoor skating rink that her dad had made for the family and neighborhood friends. She goes on to mention that one of her favourite memories of playing minor hockey was having tournaments at home in Shaunavon. The whole community would come out and cheer everyone on. It wouldn’t be unheard of for the team to play two, three or maybe four games a day, she goes on to describe. “It was just like hockey mania. Those are the best memories that I have.”

A lot has changed since those days, most notably an illustrious career that has taken Wickenheiser around the world and prompted her home community to recognize her accomplishments in a multimillion dollar way.

The arena complex in Shaunavon houses a small collection of Wickenheiser memorabilia. A committee is currently tasked with creating and dedicating a larger and more permanent space within that facility. 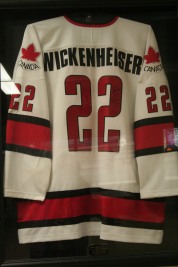 One of Wickenheiser’s Jerseys is hung on display at the sportsplex in Shaunavon.

For nearly 20 years Hayley has been making hockey history and repeatedly taken a sledgehammer to many of the stereotypes that continue to surround female athletes, particularly hockey players.

The Town of Shaunavon hopes that the new rink facility will continue to allow hockey and other ice sports to be a vibrant part of their community’s future.

Whether you are attending a day of “Hockey Mania,” in Shaunavon or just driving through, take a few moments to stop at the Crescent Point Wickenheiser Centre and tour the display they now have celebrating the hockey achievements of the Hometown, Provincial and National Hockey hero. The Wickenheiser Museum is very informal now. However, a committee has been struck to further develop the area.

A collection of sports memorabilia is on display at the Crescent Point Wickenheiser Centre.

You are in luck! This is a brand new facility, the washrooms have plenty of stalls and they are clean and modern.

How to get there?

Shaunavon is located on Highway 13, 100 km West and South of Swift Current (50 km south of the Highway 1 and 37 Junction at Gull Lake).

The Crescent Point Wickenheiser Centre is located at 201 7th Avenue W. It is most easily accessed by 10th Avenue (the first intersection when approaching from the North). Then turn right at 4th Street West before turning left at 7th Avenue. The recreational facility is located next to the high school.

If you aren’t in town for a day of Hockey Mania it may be best to phone and confirm the facility is open to public access.
Simply call 306-297-3029 or e-mail recreation.shaunavon@sasktel.ne

If you are too far from Saskatchewan to #GoHere maybe you want to #GoHere instead: The third annual Wickenheiser International Women’s Hockey Festival is taking place again in Burnaby B.C. from November 15th – 18th. Or check out everything Wick related at www.hayleywickenheiser.com and learn more about this inspirational mentor for both young girls and athletes of all stripes.