I’ve watched enough tv shows and movies to know that spending a weekend  “antiquing” is high on my list of things to do.

In my vision of how a weekend of antiquing plays out, I see a couple waking up early on a Saturday or Sunday morning, with hours of nothing to do stretched ahead of them, coffee in hand enjoying a bagel as they plan their route for the day.  Yet, until now, I’ve never thought that vision in my head would be a reality here in my prairie homeland.  I’m not sure why, but I’ve always thought of it as something you would do down East, in Ontario, Maine or New England, not something you would do in Saskatchewan.

This past weekend, we decided to have a little staycation, and in addition to a number of other activities, planned to spend our Sunday exploring some of the things that were on our summer bucket list – head to Maple Creek to enjoy Cowboy Brunch at the Ghostown Blues, and from there head to the Sandhills east of Leader, crazy carpet in hand.  We hadn’t planned to make any stops along the way, but there along the side of Highway 21, was the sign:

And that New-England-styled vision of “antiquing” crept back into my head.  It was a weekend, and while we didn’t have hours stretched ahead of us that day, I still had an excited little feeling tickling in my belly.

We slowed down, we weighed our time constraints with our desire to explore, and I’ll admit, with our feeling that their vision of “antiques” might just be garage-sale fodder.  But we decided to just shake off our preconceived notions, made the turn and head down the long driveway anyways.

At first we were a little hesitant – many places in Saskatchewan aren’t open Sunday’s, would we be intruding on someone’s home on their day of rest?  But the sign did say “Open” so we continued on (it was a loooong driveway!).  Emerging from the trees we saw a house, but were still  not 100% sure we were in the right place when we saw it.  The old-styled General Store front, that seemed so perfect, and completely fit my romantic notion of what an antique store should look like.

Housed in the old “Madison” General Store, first built in the early 1900’s (Madison was a small rural Saskatchewan town located 20 km west of the Town of Eston on highway 44), lies Spruce Creek Antiques.  Here owners Wayne and Deb Wenzel had the vision to buy the old building and move it to their farm as the perfect place to showcase the antiques and collectables they have so lovingly collected over the years. 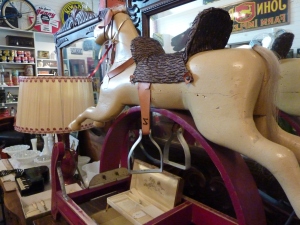 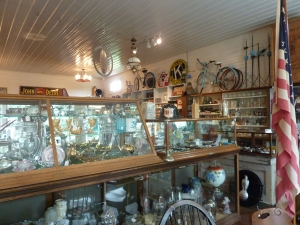 While I thought my daughter and my husband would be bored visiting the store, and that they were simply indulging me, they each found things of their own to take delight in.

For my husband it was seeing the old camping heater that his family had used back in the early 70’s, that his brother still bears the scar from, and the old “modern” telephone that once hung on the wall of their Maple Creek home, making them the “hippest” family on the block.

For my daughter, it was some beautiful old jewelry that even she in her “saving for University” mode could afford, and seeing things like the old trick-Wrigley’s gum package that she would have loved to try on her brother.

For me, it was seeing the host of Depression glass they had, something I’ve been obsessed with since seeing a Martha-Stewart type layout of a table set with it.  Pink and green, and even some blue – I loved it all, and actually purchased my first-ever piece that very afternoon! (Let the collecting begin!).  I also saw this old typewriter, that as a writer, I would dearly love to own 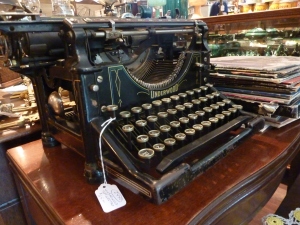 and an old bankers cabinet, that would be perfect for storing my magazines and clippings.  While I didn’t buy it that afternoon, I may still yet start saving my pennies for, considering Wayne offered to make me a deal.

But even above and beyond the treasures that Spruce Creek Antiques housed, the greatest treasures we discovered were Wayne and Deb themselves.  When we told them we were heading to the Sandhills and that we weren’t quite sure where we were going, (even though I had read the Sandhills GoHere post written by Elizabeth), he happily brought out a map and gave us precise instructions on how to get there. (You can’t beat Saskatchewan instructions – “drive past the blue and white quonset!”).

He also did a fabulous job of telling us of all the other interesting sights to see and things to do while we were visiting the area – including telling us of another antique store located in Leader. (I’m seeing my weekend of antiquing starting to unfold on another trip!).

If you’re looking for treasure, both the collectable kind and the people kind, you’ll definitely find it when you GoHere.

How to GoHere:  At the junction for Maple Creek on the Trans Canada (where the gas station sits), head North up highway 21, passed Fox Valley and Liebenthal on you’re way to Leader – about 15 km before you hit Leader you’ll see the sign and Canadian Flag shown above.  Make a right and head down the long driveway (keep going…keep going), just past the trees you’ll see their modern farmhouse on the left, and the Madison General store on the right.  Or you can use this Map if you’re not quite sure, or you’re coming from the other direction.

Gotta Go?:  Not sure if there is a public bathroom for use in the actual shop – but even if there isn’t, I’m sure Wayne and Deb would help you out!