What’s the chances you’d wander into a visitor centre in the middle of small town Saskatchewan and bump into a lion?  Well if you’re visiting the Town of Assiniboia (population 2600) those chances increase dramatically.

Showcasing the Prentice African Safari Exhibit, located in the new Tourism Information Centre (Old Library, 110-4th Avenue West, Assiniboia), the Prentice Exhibit is a gift from the Prentice family, on behalf of Wilf Prentice, to the town they call home.

Born and raised on the family farm Wilf Prentice was active in farming his entire life, though he also owned a car dealership and a manufacturing business.

Through his manufacturing company, Prentice invented and manufactured something called a “bale stooker” (<- go here to learn more), in 1960.  An invention that then gave him the opportunity to indulge in another passion of his – hunting.  Heading to Africa on a hunting safari on 3 separate occasions, in Botswana, Zimbabwe and South Africa,  Prentice “bagged” a number of different species, and managed to bring them home to have them mounted.

Not a big fan of hunting myself, (though after living in the North, I did get over some of my prejudice against it), to some extent I like to think of some of these specimens of having died of natural causes (ie. seeing a white Saskatchewan farmer roaming the plains of Africa might have caused some of them to have a heart attack?  It’s possible if not probable!).  But regardless of how they arrived in Assiniboia – the fact is they are there – and they are cool.  They are also such a totally unexpected sight, it ups their cool factor by about 100%.

Perhaps the biggest things I found to be inspiring about this collection are:

a) there is no way these types of specimens (ie. Elephant tusks) would ever be allowed out of their respective countries today.  With laws that were much more lax in the 70’s when these were procured, Prentice somehow managed to ship them home and have them mounted by Jack Acheson in Montana who arranged the hunting trips in the first place.

b) this is only HALF of Prentice’s collection. The remaining specimens remain in the family.  and

c) it’s a collection that taught me something, and I love to learn.

While I know all about lions, and zebras and cheetas – and was almost sad to see the elephant ear with it’s map of Africa, and the elephant feet stools (though it is very impressive to feel the ivory of those tusks).

I had never before seen an Eland, and knew nothing about this animal, or even that it existed.

While a regular picture of this animal, may make you think of just your average deer-like looking animal.  Seeing it (or at least a part of it) up close and personal, as well as reading the bio on this animal, made me realize, there is still so much I don’t know about Africa and the wildlife that it houses.

An Eland of Africa

Things I learned about the Eland include:

*They are a large antelope

*They are able to vertically jump 8ft into the air from a standing position.

*They eat shrubs and bushes but exist largely independent of water.

*And at 1200-1500lbs they are HUGE!  Just how huge?  Look at this photo of the Eland with the cameraman (Ross) I was on a shoot with, standing under it, to give you some sense of the size.

So if you’re visiting Moose Jaw (Assiniboia is just 60 minutes South of Moose Jaw), or you’re heading out to Big Muddy (just another 45 minutes away) definitely stop in at Assinboia to see this and other surprises (more to come on that later) that this small town has to offer.

For more information about this exhibit, contact Town of Assiniboia, Economic Development and Tourism, Tourism Coordinator Julie Newton at 640-6430.

Here’s just a few other shots of a small smattering of some of the animals that are there: 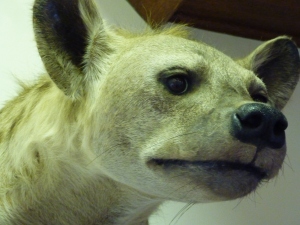 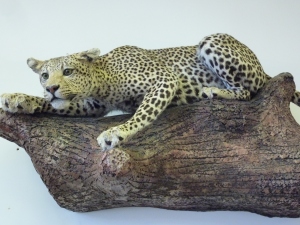 How to Get There:  Head South through Moose Jaw to Hwy SK-2 (there’s plenty of signs) – and just follow the hwy all the way down to Assiniboia. Or check out this map.

Gotta Go?: I didn’t visit the washroom in the Tourism Office – but considering it

The Prince of Wales Recreation Centre

was once the Town’s Library I’m sure it’s just fine.  I DID go and use the facilities at the new Prince of Wales  Recreation Centre just around the corner – and since it’s brand new it’s very shiny and clean!

Good to Know:  If you head to Assiniboia their town website (click here) lists a number of Tours that are available and the contact information needed.  They give itineraries for those who are looking for cultural tours, adventure tours, active tours, or area history tours.  It’s quite impressive really.

The Prince of Wales Rec Centre also has the Town Library with free internet and computers for use, and a movie theatre showing the latest attractions.