Learn the lingo, experience the game, and embrace the fun.

Curling is as Canadian as Tim Hortons.

Curling is the backbone of small communities everywhere.  As much a part of Canadian culture as a Tim Horton’s.  A big player on the the Canadian winter social scene, for those of us not born into it, or drafted into it by more knowledgeable friends and family, it’s a sport that remains as mysterious as a game of cricket, and one that has an equally mysterious language all its own.  With phrases like: “Draw Weight,” “Hog Line” “Out of the Hack” and “In the House,” it can be daunting for those who think they might want to give it a try, but who have no idea how to get started.  For those of us who didn’t grow up with a broom in our hand and a “hurry hard” in our ear, just exactly how do you go about trying to learn?

The “Rocks” as they’re called are numbered, so they’ll know who threw what – good or bad.

To help those like me, who have yet to embrace this seemingly easy, but deceptively hard sport, Curling Clubs around the Southwest have been opening their hearts and their ice times, and welcoming newcomers by hosting a number of “Fun” curling events.  From lessons, to cheap open ice nights to tournaments known as Bonspiels, their only goals is to help newbies learn the lingo, experience the game, and embrace the fun.

The “Really Bad Curlers” prepare to take to the ice. 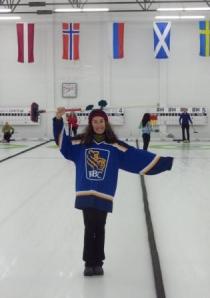 Above all have fun – if a girl from Tunisia can do it – so can you!

One such event I recently attended was the Swift Current Curling Club’s 2013 Funspiel.  With a hastily put together team of myself, my husband, a young man from Ontario, and a woman from Tunisia, who surprisingly enough had more experience than all of the rest of us put together, we knew that while we weren’t likely to win, we were likely to have a good time.  And we were right.  Calling ourselves the RBC Team – aka the Really Bad Curlers (thanks to RBC for lending us the jerseys) – we soon happily discovered that our skill level didn’t much matter as each game had its own “twist” that ensured even we would have a chance. Rolling dice to see which points counted, counting all of the rocks outside of the house instead of inside, and counting only those rocks in play that were either even or odd, ensured that ven when pitted up against experienced curlers the mixed-up rules of the game meant that each team had an equal chance of scoring points. Which, as was intended, meant we didn’t have to walk away with our heads hanging down in shame.  With the pressure off – all that was required of us was a desire to learn, an ability to rise with dignity intact from a fall, and a sense of humour to laugh at our mistakes.  All of which we had in abundance.

Not everyone has stylish form but it gets better as you go.

With open minds, and wobbly balance (thank goodness for the brooms that held us up), we learned some important lessons especially when it came to the lingo — including:

If you’ve got even the smallest inkling of a desire to try curling, I highly recommend that you give it a go.  If for nothing else but to say that you tried, and to be able to stop on a channel featuring a curling match and yell out to the competitors on screen in a most knowledgeable voice … “Hurry Hard!”

The “Sheet Disturbers” may look like they’re on the wrong ice – but it’s all in fun.

For those like me who have never curled before – here is my take on what the game is all about, with definitions of some added lingo thrown in for good measure:

Curling is a serious game, even when you’re dressed as Dorothy and the Tin Man.

1) Teams:  Teams are made up of 4 individuals.  One who is the boss (the “Skip” otherwise known as the “fourth” or the “hammer”), who remains on the other side of the ice, telling you where you should attempt to “throw” your rock. The Skip always throws last.  The other team members are called the “1st” “2nd” and “3rd” respectively, and once you have your number, that’s the order you throw in for the rest of the game.

Sitting in the “hack” is all about foot placement.

2) Object:  Originating from the “hack” (the little black rubber starting points on the ice), your goal is to place one foot firmly on the rubber, while the other foot has a “slider” placed upon it, on which you will …um…slide…ideally. (In reality you’ll probably just fall the first couple of times but that’s to be expected). Pushing off from the hack, you will “throw” your “rock” (aka slide the heavy stone-like object with a handle), down the ice, release it from your grip and hope like heck it gets past the “hog line”  with the ultimate objective being of course to try and get it as close to the “button” (the bulls-eye) in the “house” (the series of coloured rings) as you can. Note:  Don’t try and actually “throw” the rock.  They’re heavy, and the only thing you’ll end up throwing out is your back.

The “Skp” stands at the opposite end and points to where he/she wants you to “throw” your rock.

3) Strategy:  While the object is to be a close to the button as possible, you also want to ensure that you make it as difficult as possible for the opposing team to get close to it.  This involves throwing up “guards” (expendable rocks that can be bumped like bumper cars out of bounds), and equally aiming for the other teams rocks to knock them out.  Do it with enough precision, force and luck and you might even get a double (2 rocks hit out), or a triple (3 rocks hit out).

The scoring in curling seems like it should be easy – but it’s deceptively tricky.

4) Scoring:  Here’s where even I get confused.  The numbers at the top of the score board are the actual points. Each time you complete an “end” (both teams have thrown all of their rocks (8) down to the other side), you count who is closest, totaling up the number of one colour of rocks that are in the “house” without the opposite colour being closer.  When you put the score on the scoreboard, it’s the “end” number that you post under the appropriate score on the line that reprsents the colour you are throwing. (Even I didn’t understand that – best to ask a real curler).

There are two kinds of rocks – yellow and red. Both are heavy.

How to GoHere:  You pretty much can’t throw a …well…a rock without hitting a curling rink in the Southwest, so they should be too difficult to find.  In Swift Current you can find the Curling Club in the I-Plex (also home to the Broncos) and in Shaunavon at the Wickenheiser Centre. In EVERY other community it’s the biggest building you’ll see around.

Gotta Go?: The Swift Current Curling Club happens to be located in the new addition built on to the I-Plex, and as such it’s got brand new bathrooms that were good enough for curlers from around the world, when Swift Current hosted the Ford Women’s World Curling Championship.