Green is the colour, football is the game, we’re all together and winning is our aim. So cheer us on in the sun and rain, Saskatchewan Roughriders is our name!

When I moved to Saskatchewan just under 5 years ago, I was already a Saskatchewan Roughrider fan thanks to my Saskatchewan-born husband, but moving to the Southwest definitely turned me into a full-fledged Rider nut!  And while the majority of this blog focuses on all the amazing and wonderful things to see and do in the Southwest  (which we are realizing is way more than even we knew of), you simply can’t write about anything to see or do in Saskatchewan without mentioning the Riders – a destination all their own.

The helmet the Riders emerge from at every home game.

Whether you’re a visitor to the Southwest, or it’s home sweet home for you – whether you’re a true football fan or you can’t tell the difference between a touchdown and a field goal – attending a Rider game in Regina is an experience not to be missed.  No matter how many CFL games you’ve attended elsewhere – Regina is in a league of it’s own offering up an experience that starts the minute you hit the highway and look into any and all other cars on the road with you.  Chances are you’ll see most, if not all of the occupants proudly sporting their Rider Green and waving madly to you as soon as they see you wearing yours.  As early as five minutes into your trip, I’ll guarantee you’ll already start to feel a part of what locals call “Rider Pride.”

Next, as you drive into the City, no matter where you go, you’ll see Regina-ans, sporting their Green, even if they have no intention on attending or even watching the game.  From Chapters to Home Depot, Costco to Petsmart, the Green of Rider Nation will be seen everywhere, and the excitement of going to a game will really start to be felt! 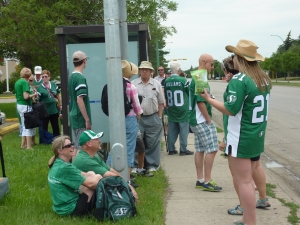 Fans waiting for the Park N’Ride bus at Southland Mall

In our case we walked into the food court at Southland Mall, one of two locations where you can park and ride to the game – and everywhere we turned there was a sea of green and an excitement that was palpable!  Then it was out to catch the bus and catch even more Rider Pride with the 50 or so others who were waiting.

Upon arriving, there’s so much to see!  From the Tailgate Party taking place in the practise field next door to the Stadium (and while they do serve alcohol there – it’s still a very family-friendly atmosphere with games and bouncy castles as well as a place to grab some food before you head in), to the Pep Band getting people charged up prior to the game as they wait outside the front gates, to seeing all the fun and amazing costumes that people deck themselves out in!  Prior to the game, the crowd itself is entertainment enough, and it’s fun people watching and seeing what gimmick people have come up with to get themselves noticed and on TV!

This newly married couple and their entire wedding party worked hard but they still never made it on TV – so I thought I’d make sure they made it to the blog!

Even the newly added seating at Mosaic are good seats when you factor in the new jumbotron that lets you see the action at the other end easily.

Then there’s the Riders themselves (remember this IS about a football game afterall!).  While there have definitely been some fan favourites over the years, (Dressler, Fantuz, Clearmont, Reed, etc.), it’s the spirit of the team that’s celebrated not the touchdowns, and even when losing – the Rider fans always come through for their team.  But when they’re winning – well, let’s just say those with noise issues should definitely bring some form of ear protection as the game can get REALLY LOUD!  Loud enough to make babies cry and to make rival quarterbacks drop the ball!

Rider Fans next to the Riders themselves are the best part of going to a Rider game in person!

And for those who need more candy of the eye variety…the Rider Cheerleaders can provide!

Afterwards, win or lose, fans are tired and a little less exuberant than when they went in, but they (like you) will always be glad that they came.

If you look REALLY closely (you may have to zoom) you’ll see I caught the ball just as it was going through the uprights!

Join in on the fun and GoHere!

Here’s a Video by Jason Plumb and the Willing that shows “exactly what I mean” – it’s got the Tailgate party, the wacky fans, the screams and don’t forget the Watermelons!

How to GoHere:  When driving into Regina to see a Roughrider game, it’s not too difficult at all to find Mosaic Stadium.  Coming in right off the Trans Canada, you take the newly built overpass on to Lewvan Drive, make a right on Saskatchewan Drive, turn left on Elphinstone, take the third right onto 9th ave and Mosaic will be on your right.  Or…you can always follow this map.

Gotta Go?:  In addition to the bathrooms within the stadium building itself, both at the Tailgate Party, and surrounding the perimetre of the Stadium there are a number of porta potties for your use.  Icky – but effective.  Make sure to go before the game, even if you don’t have to – because you won’t want to try and do the “excuse me, excuse me” shuffle during the game and raise the ire of fans trying to watch!

3 thoughts on “Saskatchewan Roughriders: Green IS the Colour!”