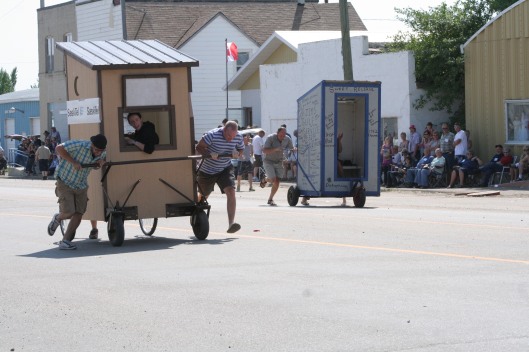 The “Biffy Races” of Morse are a tradition that date back to the 1970’s.

As a blog that includes information about the various commodes that exist around the Southwest – we were intrigued when we heard about the “Biffy Races” put on by the Town of Morse. Otherwise known as the “Latrine 500” the races are a tradition that started back in the 1970’s when the then Downtown Business Association was looking for a fun thing to do for their annual “Morse Days.” Having heard about outhouse races that were run in the NWT, the group decided “why not here too?” Why not indeed!

Even the Town’s Medical Clinic staff joined in on the fun.

While the original Biffy races started out with each team presenting their own outhouse, decorated in the theme of their choice, today’s version is a little more subdued with two common biffys that are passed down from group to group. Still the fun they have, as each team takes their turn, is more than evident in their faces. 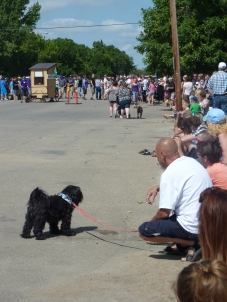 Hundreds lined the street to see this year’s races.

This year’s races had huge attendance, thanks in part to the Town also celebrating their Centennial that weekend, but I’m hoping this fun tradition is something that will continue to roll for years.

With each team utilizing the same biffys over and over, it was inevitable that the overuse would result in a blowing of a tire

Pit crews were called out to take care of a blown tire.

– told that it would take awhile to get pitcrews out to throw on the spare, we set to wandering the town to see what it offered.  What we found was this: 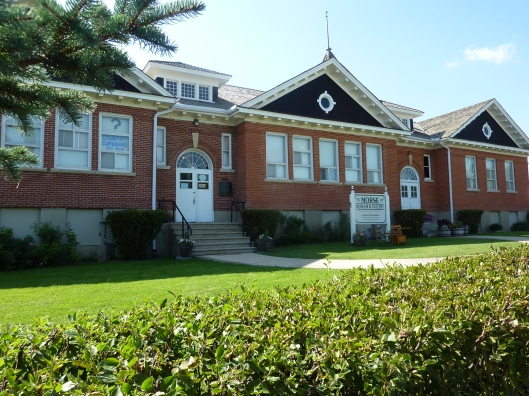 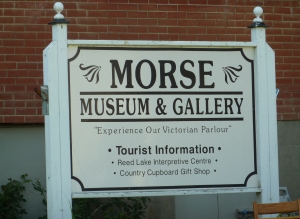 Built in 1912, by the Morse School District, the Morse School was closed to student usage (due to a new adjacent school being built), in October of 1979, and was reopened as a museum in July of 1987, after it was saved from demolition in 1980 by the Morse Cultural & Heritage Association, and declared a municipal heritage property in 1981. 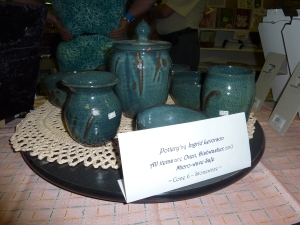 Inside was amazing.  In addition to a wonderful gift shop filled with the works of local artists, including hand blown glass, jewelry, photographs and pottery (which we surprisingly discovered had been created by our Swift Current neighbour – who knew?)!, it also had a number of Saskatchewan-authored books and other surprises.

Across the hall from the gift shop lay the Museum’s Tea Room aka their Victorian Parlour.  A place where visitors can enjoy a cup of coffee or tea, and a treat of cookies (or in our case pie), provided by one of the many volunteers that keep things running smoothly.  With no local cafes in existence anymore, it’s also become the hangout for the morning coffee crowd (the Morse version of Tim’s) – though I’m told that the locals don’t get the edible treats that the visitors do!

Surrounding both the gift shop and the tea room, in rooms that once housed students of old, lies the true gem of the Morse Museum, its links to its past.

Not content to just house collected artifacts and put them on display, the museum’s curator has done an excellent job, of discovering the stories behind those artifacts.  She’s also done an excellent job of organizing those artifacts into rooms, set-up as they would have once been. Instead of just telling you that a chest located in the bedroom set-up was from Perth, Scotland in 1867. 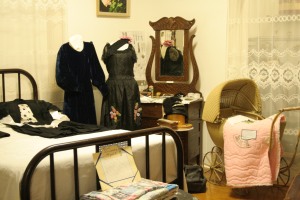 The self-guided notices set-up in each room tell you who it was that brought it over and what their connection to Morse was.  A personalization that for me, made the museum all the more interesting.

When I told an Education Assistant friend of mine about the Museum, she informed me that she had gone on a field trip to the Museum just this past year with her Grade 2 class, and while she was worried that a Museum located in a small town, would have little to keep her active kids busy for an entire school day, she was pleasantly surprised to find that they actually didn’t have enough time to experience everything that it had to offer.

As seen in this picture from 1923, Morse was once a busy and bustling community.  Now down to 236 residents, I’m pleased to hear that the population of Morse is once again on the rise, as young families realize a safe, affordable bedroom community, snugged in between two larger centres, is a great place to raise their kids.

This quote, located on the plaque outside the Museum is something I think that says it all:

Our past remains part of our future.

How to GoHere: Located right off the Trans Canada, about a half an hour East of Swift Current (or an hour West of Moose Jaw), the Town of Morse is well signed and easy to find.  Once on Main Street, just head over to Saskatchewan Ave, make a left, and travel about 5 blocks.  You can’t miss the Museum, but if you do, you can find it here on this map.

Gotta Go?:  Biffys racing down the street aside, the Morse Museum has a “lavatory” available for public use and they welcome visitors to GoHere.