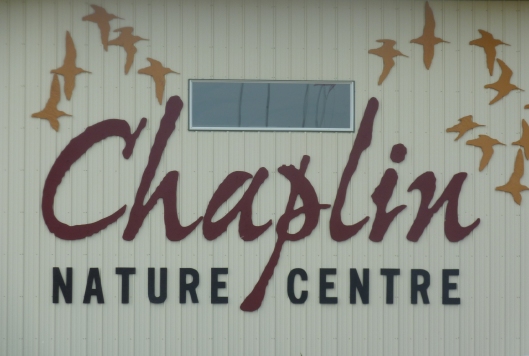 If you’ve ever driven down the #1 Highway between Swift Current and Regina, you’ve probably seen this place, right after (or before depending on your origin), the sodium-sulphate mine/plant, you know the one that makes it look like there is SNOW on the ground (shudder).

But, if you’re like me, you’re usually in too much hurry to stop and actually check it out.  But you really should…it’s more than just a little cool. 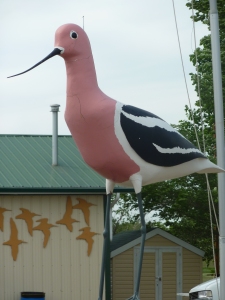 Known as the Chaplin Nature Centre it’s a Birder’s paradise.  Offering  a wealth of information through interactive displays on the more than 30 different species of shorebirds that flock there.  They also have information about the snow-like sodium sulphate that covers the landscape, and the brine shrimp industry that prospers here (yet another thing I had no clue about!).  Shrimp?  In Saskatchewan?

“Each year hundreds of thousands of birds stop at Chaplin Lake
– some to nest, some to refuel on their way to their Artic breeding grounds.”

I think the thing that surprised me the most was the tours they offer (yeah, don’t ask me what I thought the bus was for…it’s just one of those things you see…but don’t really think about).

Some of the tours they offer include their Chaplin Lake tour where for only $15 you can jump on their (air-conditioned!) bus that leaves every 2hrs (between 9am and 5pm) and takes you on a 2hr tour to places you couldn’t drive to yourself even if you wanted to considering it’s all private property they’ve been given permission to tour on (provided courtesy of Saskatchewan Minerals).  This way, they do the driving, and they can get much closer to the birds, the mine and the shrimp, while at the same time tell you exactly what it is you are looking at.

They also have much longer tours, and at $50 for 6hr tours (which works out to $8.33/hr), it’s a full day of someone else doing the driving for a change, AND they bring the lunch, water, juice and a tour guide!

Some of the different tours for the 2012 season include:  trips to the Ducks Unlimited Site where you will see: a “large selection of waterfowl, bittern, herons, shorebirds including black neck stilts and black-bellied plovers.” A tour that takes you to Mortlach (mmmm Saskatoon Berries…), Bessant and the Thunder Creek Watershed, where you can “expect to see many of the prairie species, including warblers and sprague’s pipit as well as waterfowl.”  And another that takes you to the Missouri Couteau (? – must still learn about this one!) as well as the Ducks Unlimited Site.

It has always been my contention that the Southwest is just too huge and spread out for someone who’s not from around these parts to drive everywhere themselves.  I’ve always contended that more tours need to be available so that people don’t have to wander the prairies aimlessly.  Well here they are.  Even if you’re not a birder, I bet you’d get a lot out of these – and all at a pretty reasonable price too!

How to Get There:  This is an easy one.  Right on the Trans Canada Highway between Regina/Moose Jaw and Swift Current, it’s simply a matter of seeing the signs for Chaplin and turning.  If you’re heading East it’s right after you see the sodium-sulphate to your left.  Just cross over the bridge and make the first left.  If heading west, don’t turn at the first turn-off into Chaplin, keep driving till you think you might have missed it, and make the next right (though if you hit the “snow” you have gone too far and missed it!).  For those who prefer to GPS it…follow this map.