I recently spent the most spectacular day in Maple Creek meeting with the locals and talking almost everything ranching and ranching heritage related. After a full day of talking to Cowboys and Cowgirls, reminiscing about rodeos, reciting cowboy poetry and being greeted with “Howdies,” there was one thing I was craving. I have always lived by the old saying of “When in Rome,” so “When in Cowtown,” as Maple Creek is affectionately referred to by some, I was on a mission to find myself the perfect steak.

Lucky for me, I had completed some fairly informal facebook research on dinning in Maple Creek before I headed in to Town. The exchange went something like this:

GoHere said to the Rockin’ Horse Cookhouse: “We’re in Maple Creek on Wednesday, what do you suggest we try.”

To which they replied: “Our House specialty steak is Steak Peppercorn….. an 8 oz bacon wrapped Fillet Mignon, cooked over hot coals and served on a bed of Madagascar Peppercorn Brandy sauce.  The Pad Thai is a favourite.   If you’re in for lunch, we’ll be having Smoked Brisket sandwiches (we have our very own wood smoker), served on carmelized onion and bacon bread!  Oh, did we mention our bread is fresh; we bake from scratch everyday.”

They had me at “Steak Peppercorn.” 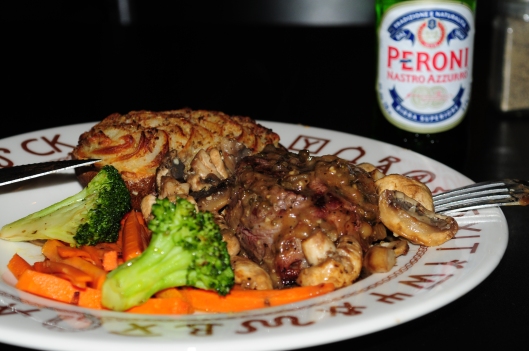 My rare steak was cooked to perfection and the mushrooms were just right.  (I would have been satisfied just with those two things). A surprise bonus with the meal was the selection of import beers they have in stock. The only complaint I have concerns the lack of home baked bread to sop up the steak juice.

There is a strong ranching heritage in and around Maple Creek; that isn’t to say that the whole town has a country feel.  I left disapointed that I didn’t see nearly as many wranglers as I had hoped.

May is the fourth birthday month of the restaurant and pub. If you happen to see Laurie or Ralph, wish them a happy anniversary.

How to get there:

To get there turn onto Pacific Avenue, it doesn’t matter if you are traveling from the North or South into Town.  Once you turn onto Maple Street start looking for a parking spot because you are there.

The bathrooms are clean! YAY!